Hey guys Lolman here with another deck I want to present to you, the Giant 4 Musketeer.

This deck was created by Tobias Spirithawk and in my opinion, this is a very effective deck to run in challenges because of just how surprising it can be and also how strong it is on defense as well as offense!

Now onto the deck. 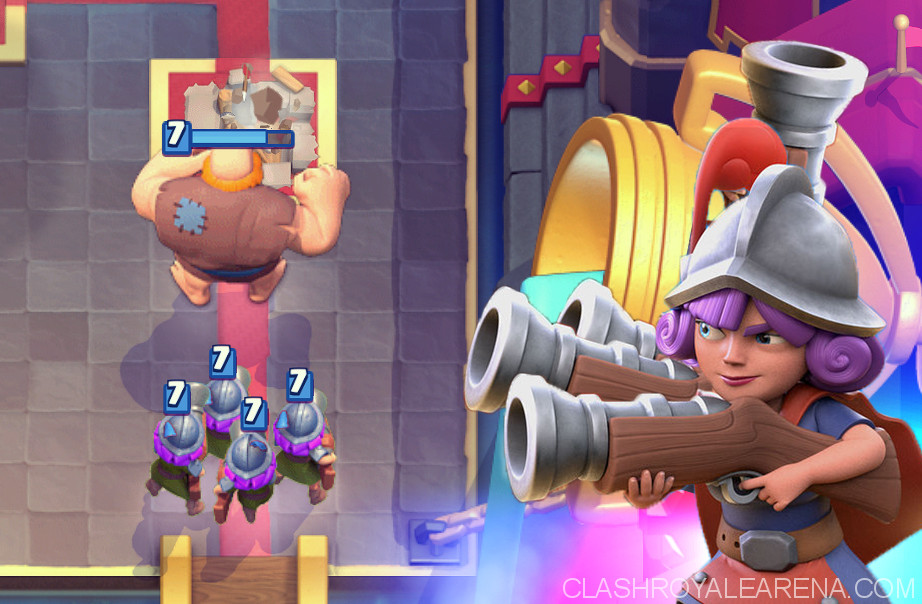 Giant- Main win condition of the deck! Most the output damage will be coming from your Giant smacking the Tower.

He will be used to soak up hits for your supporting troops. Giant is also better than Golem in this deck because of his 5 Elixir cost. Only 1 Elixir more than a Hog and you are less likely to get punished for a Giant in the back.

He is also much better than a Golem at rushing if the opponent pumps up and you have a good punishing hand as well!

3 Musketeers –This deck has 3 tanks. Giant, Mini P.E.K.K.A and the Ice Golem. This allows for it to function as a hybrid deck. Both Giant beatdown or a 3 Musket cycle.

This is a very strong push and can take out most defensive troops because of the sheer amount of damage the Mini P.E.K.K.A will dish out.

Musketeer- This is the surprise card of sorts.

Also she’s a far cheaper defensive option for air troops as defensive 3M in 1x Elixir can be expensive.

Elixir Collector – This deck having an average cost of 4.3 Elixir is not cheap by any mean. Therefore Collector is the key.

Place the Collector and protect it as long as you don’t overcommit on defense and you will be golden.

Getting 2 collectors down will give me the green light to play offensive 3 Musketeers behind a Giant.

Splitting them depending on what spell my opponent would have. For example, If he have a Fireball, I’d avoid stacking Musketeers behind my Giant at all keeping only one of them there and no more!

Mini P.E.K.K.A- This card is mainly for tank killing. Also as one of the 3 Musket tanks.

You can simply toss a Mini P.E.K.K.A in front of 3M if you want to have a quick push and earn a response. Good thing about a Mini P.E.K.K.A + say 2 Musket push is the incredible DPS. Which would equate to no counterpush almost all the time!

Also typically till you get some pumps down, you will want to keep this card to defend big tank pushes.

Bats- With their buff similar to the 3-4 Skeleton idea, Bats are suddenly everywhere.

Their DPS is in a word. Insane.

To get straight to the point, you pay 2 Elixir for Bats that have more DPS than the buffed Mini P.E.K.K.A! Which in my opinion is value city.

Can shut down a Balloon in mere seconds. Though they can get Zapped off the map, it’s an even trade and with the rise of Log bait people are more likely to run Log instead.

Ice Golem- Kiting, good for the tank and spank strategy (tank Baby Dragon or Wizard with Ice Golem and Bats to kill em) also a tank for your Musketeers.

Very versatile and mainly a defensive card till you get the Pump advantage. Good for cycling as well. Zap/Log- This deck lacks reset so in my opinion Zap is a far better choice for the deck than Log but it is slightly weaker to Log bait in that case. Just try both.

I’ve had success with both variants, the deck is strong nevertheless just Zap would make it better vs Inferno Tower etc while Log will be better vs spell bait.

Zap and Ice Golem also synergise really well vs say a Horde behind a tank etc as well!

You will want to make positive trades and counter push.

Unlike Golem deck, if you defend a push with Ice Golem + Musketeer, you will more than have enough Elixir for a Giant in front.

Though ideally rather than doing so, if I have cycled back to a Collector, I would Pump up. When you have 2 collectors down, I would really recommend starting a Giant at the back.

This being said, early on, try to figure out what you are facing.

Try to be a few steps ahead of them because they may not have the same mentaility as you in trying to figure out what you are playing.

Do not play Giant at the back or reveal him too soon because they may use P.E.K.K.A on the same lane and you can rush the other lane.

So early on, during the first minute or so what you ought to do is to pump up and defend while figuring out your opponents deck.

Now with a general idea of your opponents deck, you will want to play accordingly.

Vs Log bait, slow beatdown pushes and try and bait out the Rocket. Save Zap for Inferno Tower and Bats for the Goblin Barrel etc. (More will be discussed in matchups). Still all the way till it reaches 2x Elixir, I would continue to Pump up despite the fact that you will most likely start pushes.

What If I put Giant at the back and my hand is Musket, Zap, Pump, Ice Golem? I’d place a Collector at the back because I have a good defensive hand. And I don’t want to give spell value by a Musketeer at the back so all the more reason to wait till the Giant reaches the bridge. So making a move like that though slightly risky can be worth it, especially if you are ahead in Elixir already!

Also, for the first 2 minutes, unless I need the 3 Musketeers on defense, I would play the deck without the 3 Musketeers. Giant, Mini P.E.K.K.A, Bats, Ice Golem and Zap are the only cards in my pushes.

You don’t need to Pump up again and utilize your 4 Musketeers.

What I like to do is Giant in the back then 3M at the bridge or center (If no Lightning) then send 1 Musket after the Giant and 2 on the other side. Ice Golem in front 2 Musketeers and place the regular Musket behind the Giant.

If I have Pumps down, I will squeeze in a Mini P.E.K.K.A behind the Giant to protect the 2 Musketeers but that is my ideal split lane push.

2 Muskes on either side and each of the two pushes will definitely be able to take down each Tower if left alone.

Thus splitting their own defenses which can be catasptophic for them if you have pumps down and the Elixir advantage.

Keep cycling this because you need Tower damage, Zap cycling will take forever to get anywhere.

Keep up with their pumping and if they Lightning your Pump punish them!

Mini P.E.K.K.A is your best friend! Use him on the Golem. Also 3 Musket like I suggested. 2 on opposite lane and one on Golem lane. Then Giant in front in order to get them to defend while you will be able to place down 1x musket as well allowing the two to shred down the golems HP.

Ice Golem is very handy in soaking up damage from the support troops like Baby Dragon, Mega Minion etc as well!

You will need to punish them for plays like this.

Punishing a P.E.K.K.A at the back.

Also if they are playing Hog or Battle Ram, always save your Mini P.E.K.K.A for it and also Ice Golem in order to soak up some damage for the Mini P.E.K.K.A because he is pretty fragile as well. Bats are key but they themselves are easily cleared off.

Mini P.E.K.K.A should be saved for the Hog. Try and keep pumping up. They most likely will Fireball/ Lightning it but that’s fine.

Keep building your Elixir advantage. Just don’t give a whole lot of value when they spell your Tower+ Collector.

Mini P.E.K.K.A on the push and Ice Golem on Graveyard. You can decide if you have to Zap Graveyard of what’s coming in front of the Tower.

Also 3 Musketeers are usually very strong vs Graveyard because ideally they’d Poison off your Pump giving them free reign to take down their pushes and counterpush!

Bats on Balloon then use Ice Golem to tank! Keep that in mind and you will be golden. You won’t lose.

You can use the similar strategy with 2 Musketeers on other lane and one on Hound’s lane then plop the second down when they spell off the two. You will get a great counterpush with the assistance of 2 Musketeers.

Keep up with your pumps and also Mini P.E.K.K.A is VERY good at taking out the 2 Musketeers as well!

With this deck, you can drop all 4 Musketeers same lane behind Giant. Utilize your Zap well and you will be golden!

There isn’t a way you will lose as you will have the bigger tank as well! Be careful though because there can be situations where they 3M one lane.

Once you Mirror the move and they maybe Minion Horde + Ram the other lane. So be careful there as well!

Mini P.E.K.K.A will kill the Miner and Pump up.

Once you Pump up enough start pushing, Mini P.E.K.K.A behind Giant and Zap will be your best friend, especially now that he 1 shots E-wiz at tourney cap and Zap will reset the Inferno Tower as well! Allowing your Giant to live on.

If you run the Log version, you will need to save Bats to distract the Inferno Tower.

Try to bait out the Rocket with your Elixir Collector. I would be open for trying to get as much damage as possible.

Say you defend with Bats and a Musket? Then Mini P.E.K.K.A in front or Ice Golem in front and see if you can get a few shots off on the Tower etc.

Once 2x Elixir comes, if you have a few collectors down, you will be able to overwhelm them. Zap would make your life far easier for you.

So there you have it. I believe I covered up most there is to about this deck. It’s really strong. Full credit to Tobias Spirithawk. The creator of the deck, give it a try! It’s really fun to play as well! Wish you all the best with this deck. Lolman out.