Hey guys! Its Blaze Stone back with another guide for you all! Today, I will be showing you guys an extremely powerful Pekka Miner Poison deck with Goblin Hut and the newest legendary of the game: Royal Ghost!

This deck is very powerful deck and has the ability to counter most decks in the meta. I easily got 12 wins with this deck and am having success with this in tournaments as well. Without further ado, let’s see the deck. 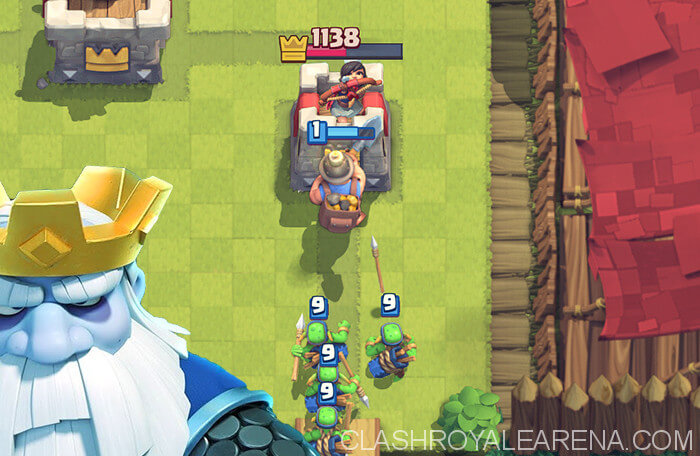 After the update, I feel she is in a very good position in the meta.

With Giant and Mega Knight decks being popular, PEKKA can provide you lot of advantage.

She is a mostly a threat card in this deck and not a win-condition.

Her main use is on defence to kill opposing win-conditions and then go for a counter push.

Generally, don’t reveal her till double elixir time unless you are matched up against say, a Giant user so that you need her on defence.

My favourite legendary card and the best right now according to CWA.

Miner is the main win-condition of this deck.

Miner can deal hundreds of damage with ease, taking out a chunk of the tower HP most of the time.

Important thing when using the miner is changing his placement every time.

One common thing I see is that 90% of the players I face send the Miner to the middle tile on the side of the tower nearer to vertical edge of the map.

Also, most players know this and can counter the first miner with ease.

Send him to another tile for more damage. Try to use all 16 tiles for placing him.

Don’t forget to use him to destroy pumps and assassinate princesses.

Easily one of the most over-powered cards as of now, this guy is simply insane.

Royal Ghost is the card which has the role of a Runner i.e. a card which can be used on defence and can be quickly be transformed into a counter-push.

He also does well as a splash support for your PEKKA, taking care of the ground swarms, which distract her.

Being only 3 elixir, he helps to cycle through your deck.

Use his invisibility well to get the maximum value out of him.

Don’t hesitate to play him on defence against cards like Hog or Miner.

Ranked as the best right now by Clash.World since as far as I can remember.

eWiz is a pretty good utility card. He does a great job on defence with its fork stun-attack as well spawn zap.

On offense, he can help to protect your PEKKA against cards like Inferno Dragon and Inferno Tower.

Slightly fragile so see that you protect him while going for offense. eWiz can be one of the most annoying cards if he survives with even 1 HP left.

Well honestly, I didn’t like this card even a bit since its release. But then I saw lot of people in my clan and on TV Royale using it and so decided to try out once again.

The card turned out to be astonishingly good in this deck.

Due to its range it can take shoot down many troops from a distance making it really great support.

Many times, it will get locked on to a tower instead of enemy troops and can whittle it down.

Miner + FM is a great combo when opponent is low on elixir.

Generally, main use of it is to defend and support from afar while PEKKA or Miner tank for it. One major weakness is that FM is pretty squishy since it can be one shotted by fireball.

My favourite card in the game.

Poison is one of the strongest spells in the meta right now. This is because of the dominance of cards like Guards and Bats which can be easily countered with Poison.

Use Poison to clear out the area and restrict the opponents moves.

It has a great synergy with Miner as well as PEKKA making it a great choice of spell to have in this deck.

Use it destroy buildings, glass cannons, swarms and finish of towers.

t is also an extremely good and definitely the safest counter to Graveyard.

One thing to remember is that use Poison when you are able to get lot of value and don’t go for damage.

Many of you must be wondering why Zap is in this deck instead of The Log since eWiz is already in the deck.

There are 2 main reasons for this:

Goblin Hut has greatly rose in popularity these days.

Personally, I have been using Goblin Hut for more than a year now, right since I was at 2.8k trophies and I must say Goblin Hut is at its apex right now.

Goblin Hut is mainly used as a distraction for building targeting troops, for continuous chip damage, continuous distraction due to spear goblins for ground troops.

Their ability to snowball quickly synergizes well with Miner as the Spear Goblins can deal insane amounts of damage when protected by a tank or mini-tank. *Note: These substitutions are only for those who don’t have the cards, have low level cards or don’t like the original cards. This is the strongest version of the deck. While the other versions are also strong, not all are this effective*

Instead of doing a minute-by-minute game plan section, I am going to explain the actually way of using the cards to win.

The reason is that due to unpredictable nature of this game, a minute-by-minute game plan mostly works only in theory and not in practice.

Therefore, knowing how to use the deck is better way of understanding the general game plan.

The Best Starting moves for this deck are:

Other than this, don’t make the first move and wait for the opponent to play, and then make your move so as to counter it.

Try to have at least 1 Goblin Hut up throughout the game as those Spear Goblins can determine how successful your push/counter push will be.

There are two main sources of damage

Chipping with Goblin Hut and Miner is something you will utilize the most in any match.

These are cheap passive plays which can do small chunks of damage and don’t usually provide a risk for counter pushes.

When you are the one to make the push, then mostly stick to Miner along with Spear Goblins from the Hut with Poison and Zap ready in your hand just in case they are needed.

Overwhelming with PEKKA and Poison is something which you will use few times but will deal large amounts of damage per push/counter push.

Don’t reveal your PEKKA in the first two minutes unless a situation arises when you need her desperately on defence.

Cards like RG, eWiz and Goblin Hut are decent counters to Hogs and Rams so in this case there is no need to use her unless the push is more than 10 elixir or you don’t have any of the other cards which is rare case.

However, against tanks like Giant and Golem, use your PEKKA. Here, defended his Mega Knight push and then went on to Overwhelm him with Counter push and destroy the tower.

Overwhelming can be done in two ways: As a counter push or as a Beatdown push.

In counter push, you use your PEKKA on defence and then go for a counter push by placing support cards and Miner Poison.

Here, overwhelming happens because opponent will be a bit low on elixir to defend the push.

A beatdown push is basically placing PEKKA in the back and then forming a big push behind her.

With proper placements and moves, you can easily overwhelm lot of defensive set-ups.

Overwhelming here means to form a strong push such that opponent has to invest lot elixir on defence.

Then, you use your Poison to weaken most of the opponent’s defences and chip down with Miner while PEKKA is tanking.

Not necessary to use Miner on crown towers. You can use him to assassinate cards like Executioner which can survive Poison and can wreak havoc on your defences.

In overtime, focus on defence and chip down with Miner Poison.

This deck can defend any one-lane push with ease.

PEKKA is the MVP for defence while Poison helps to weaken all troops.

Goblin Hut is a great distraction while FM can chip from afar, protected from enemy troops.

Flying Machine, eWiz and Gob Hut are targets for spells like Fireball and Poison. So, you can bait out spell with help of one card and then use the others, much to the annoyance of the opponent.

A PEKKA + Ice Golem combo comes on my side. Instead of over defending, I just place a Goblin Hut to distract them and Flying Machine to kill them. He also uses Poison to kill my Hut and Flying Machine, but FM due to its range avoids most of the Poison and successfully kills the PEKKA. 9 elixir on defence for 13 elixir push. +4 elixir advantage with FM surviving.

This section isn’t necessary as everything is explained above.

This deck does well against nearly all decks.

Major weakness I personally see is against 3M decks.

You should always Poison the 2 musketeers while use PEKKA in the lane of Battle Ram/ Hog rider or the princes (popular after update).

eWiz + Zap should be reserved for Minion horde. Gob Hut should always stay on the map as said earlier.

RG should be use to kill ground swarms or single musketeer in some cases.

FM should be used if you need it and can spare elixir.

Many times, you over defend and thus can’t defend the next time.

That’s all folks! Hope you guys enjoyed reading my guide.

As you know, I don’t do deck guides much but really loved this deck and hope you guys try it out!