Hey Clashers! It’s Krux here and I’m back with some refreshing breeze and a new Clash Royale guide. We are more than a week into the new year and it’s time to try a new deck. We all want to rock the arena in 2022, ain’t we? So today we will take a look at Electro Giant Archer Queen deck. Let’s get started!

The average elixir cost is 3.8 and shortest card cycle is 9. The Electro Giant Archer Queen deck is a moderate cycle deck. This has great attack potential and godly defence. The free-to-play score is bad as it has epic cards and one champion. Champions are not unlocked at lower arenas. Opening: We will follow the basic rule of thumb when a match starts. We will wait a few seconds for our opponent to make the first move. Because ours is an Electro giant deck and we won’t want any mistakes. If thehe opponent doesn’t budge, we can start first. Depending upon our opening cards, we’ll play the first card. We can place the Archer Queen at the back, near the king tower and then see the opponent’s move. Do not start with Electro Giant in the back. If AQ is not in cycle, we will use the Prince. If the enemy uses some building chaser, use the Tornado or the Tombstone to divert it. If they send a swarm, use the Bomber. We don’t have to worry about pushing right now. We have to wait for double elixir to start with our Electro giant. We will defend with Prince, Archer Queen, Tornado etc in the first minute with this Electro Giant Archer Queen deck. Try not to take much damage. 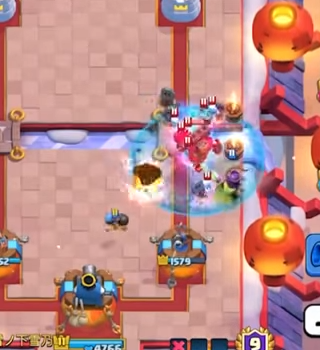 Mid-game: After placing the initial card, defend your opponent’s initial cards. If successfully defended by Archer Queen and Prince and they are alive, place the Electro Giant ahead of them. Be careful that you do it on time and the Archer Queen or bomber do not cross the Giant; it will go in vain. If you can’t put the Giant, let the troops go and your opponent defend. You should focus on the defense at this time. Once we have the elixir bar full, we will place the Electro giant at the back. Be ready with Prince and spells to take our the enemy troops in the other lane. The opponent will try to outplay us in the other lane. You can also use the Earthquake to take out swarms and defensive buildings out of the way of the Electro Giant.

Attack Push: If you have built a counter-push, it is great. Place the Electro giant and see your army marching past the bridge towards the opponent’s tower. Keep the Earthquake or the Electro Spirit handy at this time to clear out their troops placed to take out our Giant and supports. We will try to keep the support alive and make the Electro Giant reach the tower. Don’t worry even if the Electro giant takes only one hit. 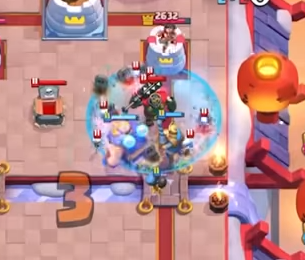 Do not overcommit trying to win in the first push. It will take 2 or three cycles of attacking to bring down the tower. After a successful defence, let your counter-push go again. You must have used one spell in defence and be ready to the other two to keep the counter-push alive. Use the Bomber or Archer Queen as the support. It takes only two or three connections in this Electro Giant Archer Queen deck to get a crown.

Note: Correct use of the spell cards, i.e Tornado and Earthquake is crucial in this deck. Do not try to hastily push and place Giant or wrong cards. Placing the Electro Giant at the bridge and hoping that it connects is the way to lose the game. This is a high skill deck and needs wise elixir usage.

Stay tuned with Clash World for more deck guides and Clash royale articles. Join our Discord to meet other clashers and discuss the game. Clash On!