Hey there! We’re back with a new kind of Royal Giant cycle clash royale deck which uses the new card Electro Spirit. Electro Spirit was released last year and we are now into Season 19 of Clash Royale. It takes some time and now people are finally getting to know the use of the new cards now. So, let’s get started. Start defensively with a Giant Skeleton at the back or cycle to it with Zappies at the back or Hunter at the back, never go for Fisherman, Electro Spirit at the back as the opponent can take advantage of the Fisherman for pulling their troops near your princess tower and with Electro spirit they can activate their king tower. Now as soon as Giant skeleton crosses the bridge, play Royal Giant, their troops will target for the Giant skeleton and then the Royal giant eventually killing them by Giant skeleton’s death bomb, so it disables the opponent for playing anything near Royal giant on the field and hence letting your royal giant connect to their tower. 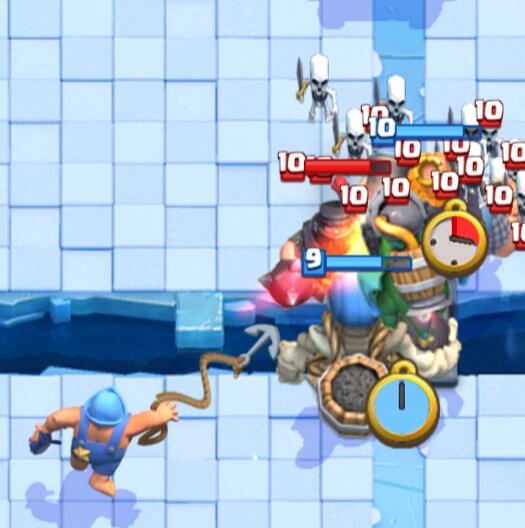 Zappies are for pure defence or when they have Inferno dragon/tower, play Zappies at the bridge to stun they’ll always have something that prevents your Zappies to lock on their Inferno, that is what the Electro spirit is for. If they have any offensive/defensive buildings, earthquake them for tower damage and clipping the defend units of your opponent, Electro spirit is for when they have Bats, Goblins, Skeleton army or their Inferno.

While aggressing, use your Fisherman on the river to pull their defending troops on your side and to save the royal also it kills them easily as now your princess tower attacks them too. Remember, the Hunter is the only tank killer you have, so you have to play it wisely mostly with the synergy of the Fisherman when it pulls their tanks, save your Hunter for their Hog riders, Ram riders, Giants, Golems and other tanks. Also, you can kite their troops by your Royal giant to build a push in the other lane, this is a good tactic.

2. Golem Beatdown: I could not find many weaknesses to this deck is it is currently meta and counters almost everything but you can always choke with this deck against a good Golem player. You need to constantly play Royal giants to apply pressure on them and not allowing them to play their Golem because once they do build a full-fledged Lumber-Night witch push, you are doomed XD.

That’s all for today and I hope you found this deck helpful to destroy your opponents. Thanks to Shreyas K again for sharing this deck guide with us. Stay tuned for more. Clash On!