Every single chest you get after the battle in game is based on the Clash Royale Chest Cycle. Because I have been receiving loads of questions relating to this topic lately, today, I am going to you the whole chest order in Clash Royale.

So many players suggested it was about 1% for Magical Chest, 25% for Gold Chest and 74% for Silver Chest. That’s a good theory but not how the game runs. 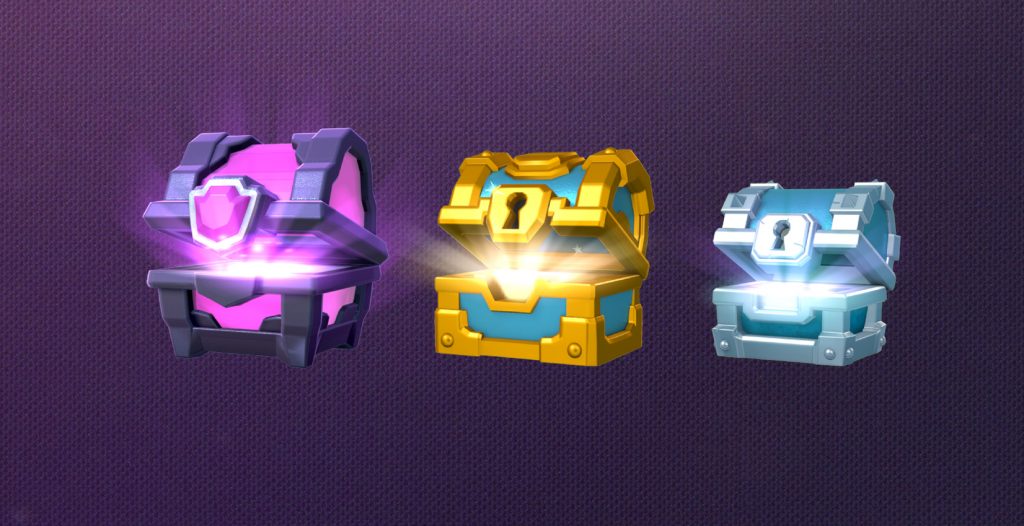 How do the Chests drop in Clash Royale? They are based on the Chest Cycle!

Basically there is a chest drop order (or chest cycle) in game. Every Chest that you get after the battle is based on this order.

When this cycle goes through, it will restart again.

This list contains 240 Chests in total, there are 52 Gold Chests, 4 Giant Chests and 4 Magical Chests in the list.

What about the Legendary Chest?

This chest randomly replaces a chest in the Clash Royale Chest Cycle.

If you bounce between Arenas, your Legendary chest drop rate is still one per 2 cycles. You need to stay in Arena 9 during the entire cycle to get one chest every cycle.

Read more about this at here.

How about the Super Magical Chest?

Once the Super Magical Chest (SMC) dropped, it will replace 1 chest in the chest drop cycle above.

The SMC doesn’t drop randomly. You get 1 SMC in every 500-chest drop.

For more details, please take a look at the Super Magical Chest page.

What If I don’t have any open chest slot?

Don’t worry, you won’t miss any chest. The chest drop cycle will pause If your chest slots are full.

This means, you can’t just simply do matches with fulfilled slots in order to get the Magical Chest or Giant Chest. You just can’t bypass the next chest in the cycle. You will always get it no matter what.

I believe that a lot of people here have already heard about this app but I still want to mention this in this page because of how useful it is.

The good side of using this app is it’s a native app. Which means all you need to do is just to open it after installing to track down your Clash Royale chest cycle from scratch. 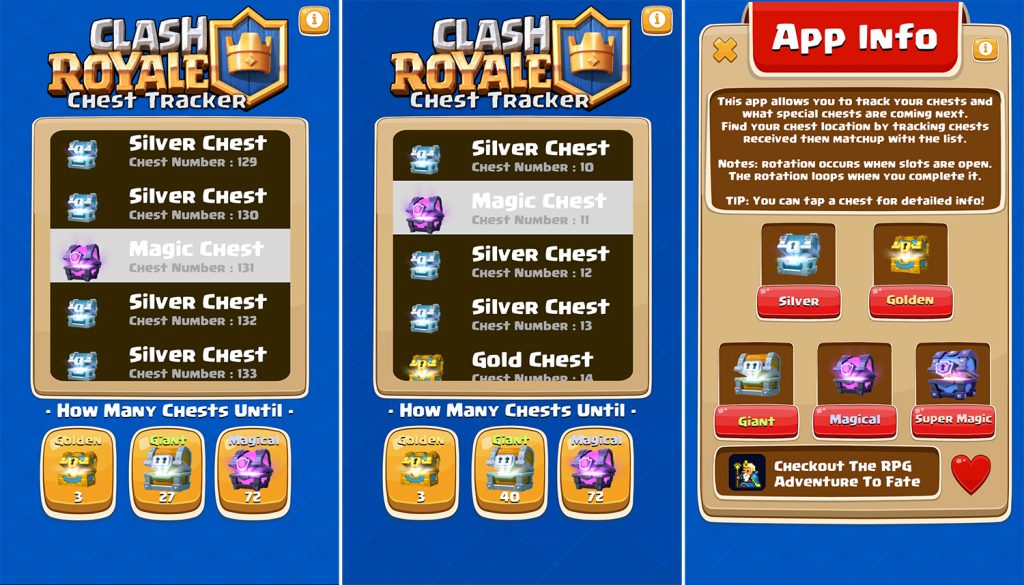 If you are new to Clash Rooyale, this is a review for you

Chest and Chest Cycle are not the best part of Clash Royale. There are a ton of more interesting stuffs!

The paradox in the mobile gaming platform is that a single blink of eye, and we have a new king defining the gaming industry. Nobody knew from where did flappy bird suddenly took over the entire internet. Sure, we all knew that Crossy road is fun to play and has good graphics, but there wasn’t a single cue of it becoming such a big hit. Who knew that candy crush saga, built on such a simple and age old gaming concept would take the world by storms and be equivalently stipulating to Bejeweled and its akin games.

Yes, Clash of clans was the definitive supreme commander in terms of raiding strategy genre but there still are few parallel gaming universe where you can get a good kick out of strategy based games. But Clash Royale is different. It stands alone and from the very first day of its launch, it was clear that Supercell had hit the bull’s eye this time. They were successful in figuring out some weird trick, some weird psychology link than countless other MOBAs and 1st person shooter game makers could not do. They succeeded in making a real time multiple player platform that was engaging multiple users and could make money without making someone feel unfair. Yes, you will end up spending tons of money on Clash Royale but then you will feel so contended by playing the game that you will have no qualms about spending your money. You will definitely enjoy the game no matter what. As simple as that.

If we dig deeper into this game Clash Royal, we will find that it is all about collecting cards by making some awesome real time strategy and is a MOBA. There is a deck of 8 cards and you have access to 4 cards at once. If you want to summon any other cards on the battlefield, then you need to use elixir, which is a time dependent rechargeable energy unit. Then, you have to move on and deploy your cards in a fashion that can attack the enemy’s crown towers in the best way possible which is arranged in dual lanes with the central king towers. Once you successfully destroy a crown tower, you can smash a king tower and once you successfully smash it completely, you win the game. The trick here is that you have to do all this in a short span of 3 minutes with the last minute giving the opportunity to have double elixir.

In multiplayer scenario, the player who destroys more crown towers gets to be the winner. In case there is a tie between two players in terms of blows to the crown towers, there’s a 1 minute lapse time or kind of overtime where the first person to land a hit and smash the tower- crown or king- wins. Of course, the king tower infers more damage to the battle units and hurt harder. The most clever ting about the game is that it is such a simple thing to learn to play it, and any simpleton or a beginner level player can get into the flow of the game quickly and play it smoothly. You simply drop units, which in turn follow their behaviors. No need of commands. Yes, the placement of troops is definitely important, but what aces the game is your skill to quickly contemplate the position of cards in your deck, the position with respect to your opponent and the elixir. Knowledge about the game seeps in when you feel comfortable in the gaming zone and before you realize, you are already joining a clan, experimenting with the available deck and getting sucked into its gaming universe. All this happens at such a lightening fast speed, that you don’t even know what happened and how did it happen. Plus the game only lasts for about 3-4 minutes, so it feels like so much is going on in such a short span of time and that you’ve achieved so much already. This very concept of short gaming period has given Clash Royale an edge over other battlefield multiplayer games because they just take too long. By limiting the number of cards in your deck, clash Royale has made sure that you are not being overwhelmed with any kind of information and there is no psychological overload or gaming barrier formed inside the heads of the player.

Yes, there are people who are concerned about the monitory aspect of the game where the Pay to win concept works. But I think this is simply overrated. There are multiple instances of real world hobby analogs where some people can spend little while rich people can obviously spend more money on their hobby. Turns out this isn’t considered unfair in our world. So why fuss over the same thing in a virtual world. If someone wants to play for fun and a little competitive feeling, then you can enjoy it and progress accordingly. You get 6 free Clash Royale Silver chests per day by merely logging into the account and claiming it and a free gold chest for claiming 10 crowns in a time period of 24 hours. You can see them all in the chest cycle Clash Royale mentioned above. That sounds pretty fair to me. Though there are timers set before you can actually open up a gold chest but earning more makes you competitive enough up to a certain degree. On top of that, the matchmaking process makes sure that you are set up against people of same levels which ensures a fair competition no matter what the situation be.

Yes you will need to spend more in order to climb up the stairs and win more, but even still the cases of card tweaking are on a high. And there might be hoards of stylish cards out there, but the simple cards still prove to be useful like arrows. Deck buildup and intelligence will still hold importance no matter what the scenario is and no matter how much you pay to reach up.

See? Chest Cycle is not the only thing bringing you happiness!

Hope you have found this small article helpful!

If you have any question about the chest cycle (or chest drop order) in Clash Royale, don’t hesitate to comment!