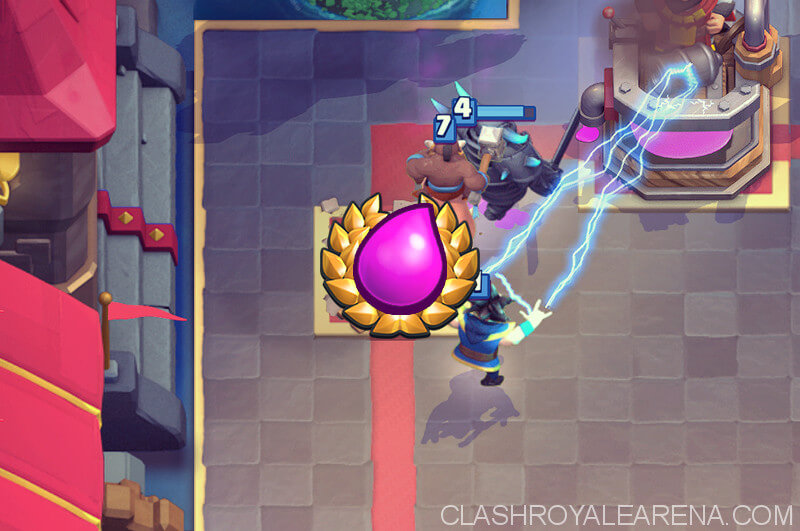 Although this is pure x2 Elixir, you still want to keep your deck’s cost at a relatively manageable average cost, which is ideally no more than 4.5.

Assuming it’s not like an all tank deck or something. I am currently undefeatablein friendly battles (35 straight wins) playing this deck vs my friends who stick to meta decks (3M Heal, P.E.K.K.A Bridge Spam, Giant Beatdown, Golem Lightning, Log Bait etc).

And this is the deck I am using – Golem Sparky Nado. I just won the Challenge with it at the first attempt.

You can also try to switch out Sparky for Electro Wizard and Guards for Goblin Gang.

Some cards I believe will help you in this aspect!

3 Musketeer Cycles may become common in this Challenge and Rocket is AMAZING at clearing them out without Heal becoming an issue. Try and have something like Fireball + Zap at the very least to make sure you don’t get hard countered by the heal spell.

And no, P.E.K.K.A doesn’t counter 3M heal if you consider how fast they can cycle back to another set of 3 Muskets.

Rocket also can be deadly on a beatdown push. See a Giant+ Sparky+ Bowler+ E-barbs? Rocket them!

Also Rocket 1 shots Executioner which can potentially ruin the entire push! Make your opponent cycle back to another one putting you at a great Elixir advantage.

Amazing value. While it won’t shut the push down you will be up a LOT of Elixir.

Now this spell when paired up with splash is devastating. Also you can mitigate damage on towers by Tornadoing troops to the King/s Tower. (Be careful with this. You don’t want to get to the point where your opponent might just Rocket cycle your king Tower.

Also Tornado+ Rocket is a legitimate move you can make in order to destroy your opponent’s defenses. Practice this combo a little to make sure you can get the timing right! Bowler with his push-back and Executioner with the air + ground splash. They synergize really well with Tornado and will help in shutting down huge pushes coming your way.

Clears 2 Gobs off a Barrel if placed right in front of the Tower. She hard counters Graveyard.

Is there anything more you need to know?

Each with pros and cons, survives a Zap and great vs bridge spam.

Now while you may be a really good Hog player, cards like Hog in my eye are just cards that allow your opponent to counter push.

Remember Night Witch on Hog is a 0 Elixir Night Witch. With her still on the board so that’s a +4 trade despite how the math might work out. You still need to counter her.

So I see beatdown as the more dominating archetype in this game-mode.

Spells are important. The heavier, the better!

While Log and Zap, Fireball and Poison are good spells, I do see Arrows and Rocket as the far better substitute.

Sure they cost more but at the same time they do far more damage clearing away more troops. You will make up an Elixir deficit far quicker than you would in a normal game mode where you will get Elixir at a regular pace.

DO NOT Leak Elixir

This is very important! If you leak Elixir, your opponents Elixir advantage will increase at 2x the regular rate.

For example, If your opponent Giant in the back and you wait ultill it’s at the Tower, they will be around max Elixir and 5 Elixir ahead thus in a sense they got a free Giant down and you will be… *screwed*

Don’t worry about over-committing to make sure you can reduce or prevent a counterpush.

Such as Rocketing Tower and an Executioner that has already gotten value from defending your push. Which is something you’d usually avoid when playing a regular game.

Like I said before about beatdown being the more dominant archetype, you also want to be able to counter beatdown. Cards like Inferno Dragon, Night Witch, P.E.K.K.A will shine in this game-mode as well because you will be able to kill tanks, and kill these tanks Fast.

Other Powerful Decks for the Challenge

The Triple Elixir challenge is already live in the game!

Because Supercell allowed you to practice via the friendly battle system I myself have tried a few decks and decided to compile a list of tips and tricks above that might allow you to succeed in this challenge.

This Challenge is split into 2 phrases: