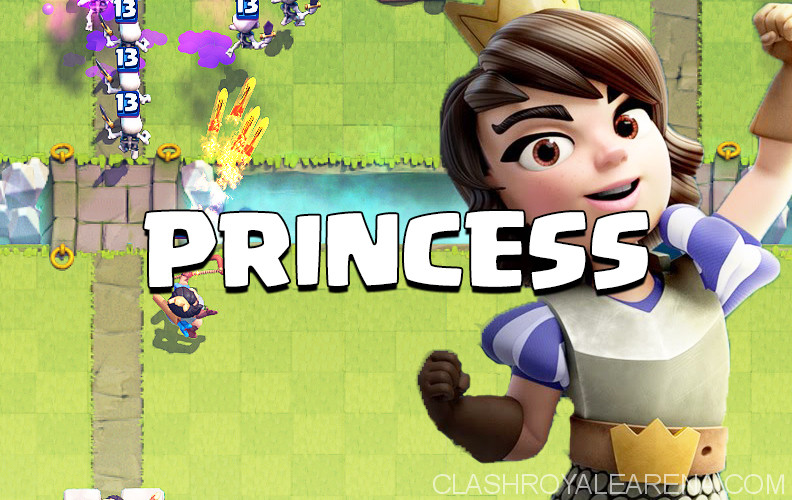 You just got the Princess and you want to know the best ways to use her?

Or you just lost the last match just because of the opponent’s Princess and you really want to counter this annoying girl now?

No worries! You will find everything you need to know about her in this guide!

I don’t tell you my opinion; I’m telling you the facts.

In case you don’t know, Princess was very famous in many decks before Zap bait deck is coming out. You will see the sight of Princess and Ice Wizard together in Golem, Giant, Royal Giant, Hog Rider, almost any decks in Clash Royale.

From then on, Legendaries mean everything to us. Craving for legendary cards so badly, we are always hoping someday we will get either one as the legendary drop rate is incredibly low.

However, by the way, that’s the past. Nowadays, Princess is losing her glitter due to her slow hit speed. She is unable to stop an Elite Barbarian, even with the help of Freeze or Tornado. Thus, people ends up choosing more versatile cards that can perform any defense yet assist in a push.

Dart Goblin shares the same health points with Princess. They are chip damage dealers and playing well in creating a Chip cycle deck which could potentially add hidden tactics, Arrow Bait – I expect a slight uptick in Arrow’s usage soon due to the Zap nerf.

None of these Dart Goblin or Princess decks have been created so far, and it might be your chance to start one.

Chip Damage without Engaging into a Battle

The outstanding stats that only Princess acquired in Clash Royale is her attack range. Range distance which could out-range the towers rendered this card an Overpowered Legendary. To balance the game, she dies in one shot by Arrow and Log.

Because of it, we often hide Princess at the back of the tower and far away from the battles to allow her to make her shots safely. This way could prevent the opposition to take her down along with your troops by just using a spell card.

Pulling her out of the fights annoyed the opponent is several ways: She is weak, so does her damage and yet her little damage could change the direction of any battles in the arena.

If the opponents don’t address to Princess, you may end up allowing Princess to do chip damage to your towers later on and even worse; another Princess is summoned on the other side. Remember that deploying double Princess at the same place is not a good idea, as separated Princess may force out at least 2 cards from your enemy.

In short, the ultimate strategy of playing a Princess like Pro is screwing up the enemy’s summoning order. It’s not that difficult to do so as long as you learn when and where to place this 3 elixir Legendary card.

Same as most Chip Cycle decks, Princess is useful in taking chip damage thereby pressuring the opponent. Consistently play a Princess while the enemy is running out of elixir or cheap cards like Goblins (troop) and Arrow (spell) apply pressure to the opponents as it indirectly forces them to spend their elixir.

Sometimes, you may put down a pre-emptive Princess to lure out the opposing forces before making a terrifying push. By this way, the chance of tearing down the tower would be higher than not doing so. Consequently, other Princess could show up if your deck cycle is speedy.

Here is the cycle of how you play Princess all the time in the arena:

For me, I would pair up Princess with beefy, tanky units like Giant, Golem, Royal Giant, and LavaHound-Aerial combo maybe.

These troops combination will last longer in the arena and allow Princess to assault from behind because the opponents need to deal with those tank combos since they are way more threatening than a lone Princess.

Long Range is the Best Protection

Princess is like the Sniper of Clash Royale. Long hit range gives her advantage to attack and keep her safe at the same time.

Typically, we drop Princess at the other lane so she could attack the invading troops on the opposite side. The opponent would have to cast another spell specifically for taking down the Princess rather than assist their push.

However, the downside is Princess would not distract the opposing troops since she attacks from somewhere further. Hard hitters like Mini Pekka, and Elite Barbarian still able to rush to the tower and devastate the tower very quickly.

Another way to make use of her long hit range is hiding her behind the King’s Tower, making her invincible for a while. However, this technique only applies to the scenario where none of your towers had been taken down.

Take account of Princess’ long hit range whenever you build a deck is also a great idea.

Since we all agree that we have to take out the Princess, perhaps, the best way is by using either Log or Arrow, so adds Log-able and Arrow-able troops like Skeleton Army and Goblin Barrel may create secondary win condition for your deck.

Well, a popular strategy for deck building with Zap-able troops like Minion Horde, Goblin Barrel, and Skeleton Army, baiting out the opponent’s Zap and take benefits of the moment to strike is so called Zap Bait deck.

After the Zap being nerfed, I suppose there would be Arrow-bait or Log-bait deck with Princess, Dart Goblin, Goblin Barrel, and others Log-able troops because Goblin Barrel is now immune to Zap.

Soon, we would have Goblin Gang joining the battle. This type of “Bait” cycle decks are going to grow within the arena, maybe even becoming the new Meta. I don’t think this is what Supercell want as it’ll boost the usage of Hog Rider to all time high.

Clash Royale’s Meta decks change over time, particularly when there is a balance change update. Apparently, we are heading to Arrow-Bait and Log-bait Meta decks, but gamers are creative. That means more innovative decks shall rise to balance the Bait cycle decks.

I believe the innovative decks would have more splash units like Valkyrie, Wizards, Witch, and even Executioner. Splasher decks are completely immune to Bait decks as Bait cycle decks always build around with swarms.

Princess is the card that you should react to immediately otherwise you will take literally infinite damage. People usually use spells as the reliable counters because they can take her out almost immediately and also do some great damage to the Tower.

Other ‘okay’ counters to Princess

Although Princess does little on her own, she is a very good card to support offensive push.

Some great uses of her on offense:

Behind a tank, she can successfully deal with Skeleton Army and brings Minions, Goblins, Archers HP etc down to Zapable.

Remember that you can’t do anything to stop your opponent from using spells on her. But you can use predict The Log to deal with Spear Goblins, Goblins, Skeletons, Fire Spirits etc.

Princess’s best use is on defense for sure.

I always try to place her on the opposite lane while defending to snipe away the opponent’s push. However, she doesn’t do a lot damage herself so you still want to couple her with something else.

Always use her from a distance unless you are desperate.

He is reliable at dealing with swarms and spawner decks. To prevent the opponent from using spells on her, place her near your King’s Tower on defense.

Princess can shutdown these cards effectively:

This is the list of some interesting card interactions for you:

Princess works best in these decks:

There are a ton of decks using Princess effectively just because of her awesomeness but I am just mentioning one in this guide, the deck I am using right now.

The one below is one of the most popular decks at the moment.

This deck can easily counter Giant, Hog Rider, Golem and so many other meta win conditions. The only trouble you may find are fast cycle and Lava Hound decks.

I hoped you enjoyed this advanced princess guide on how to use her, as well as basic strategy.