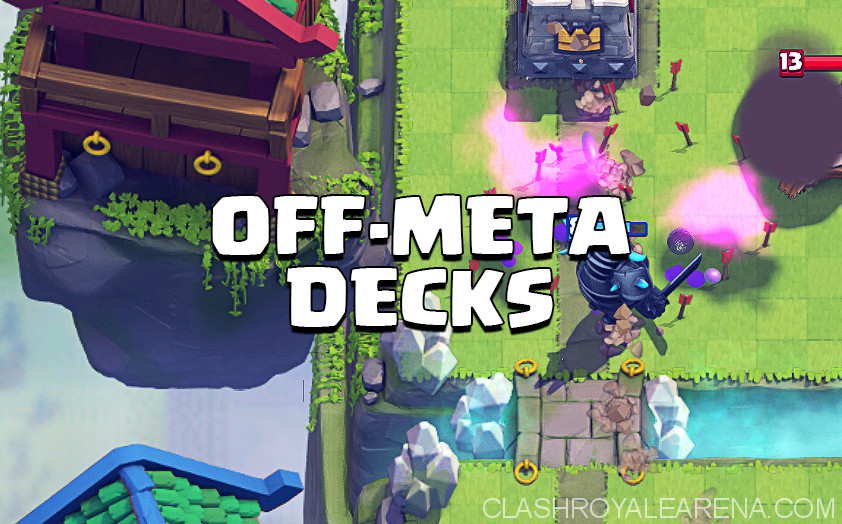 Are you tired of boring meta decks? Want to try something new? Today, let’s discuss about Off-Meta decks! I am going to convince you to try them and I am going to show you how to make your own surprising off-meta deck!

Why you should use an Off-Meta Deck!

Why you should play an Off-Meta Deck:

Off-meta decks may not be the most effective ones (The most effect ones called meta decks lol), but they are still very powerful. You don’t need to be very good to play off-meta decks. You can always easily surprise your opponents because they don’t have as much practice countering your deck. They can’t expect the specific off-meta cards you have in your specific deck. Moreover, off-meta decks break the monotony, making the game a lot fun.

In addition, trying off-meta decks familiarizes yourself with card synergies in Clash Royale. Playing with off-meta cards helps you look beyond the obvious answers to a specific function. Ignoring obvious choices forces you to think more about synergy.

For example, you might be debating between Bomb Tower and Tesla, instead of Inferno Tower or Cannon. This gives you a lot more detailed knowledge of different cards.

Playing off-meta decks will definitely increase your skills a lot because you will be using off-meta cards in very specific ways (which fulfill functions which a meta card would easily do).

According to Stats Royale, here are our off-meta cards which show up in less than 5% of all decks in Arena 10 at the moment. Interestingly, there are 24 cards in this list representing 35% of all cards in Clash Royale. Now, let’s define what qualifies as an off-meta decks. Below are three main criteria I would like to suggest. A true off-meta deck should satisfy at least 2 out of 3 criteria.

The second criterion is to handle the possibility of the off-meta deck. For example, If you use Hog Rider as the win condition but the rest of your deck is full of off-meta cards, I would argue the deck as a whole is off-meta.

The third criterion is to eliminate decks which use too many meta cards. If your win condition is an off-meta card but the rest are meta cards, then your deck is not really off-meta deck. One card can’t solely determine whether your deck is meta or not. Spells are not counted as the meta cards since there are so few direct damage spells in the game and at least one spell is basically required in almost any deck. How to build Off-meta Decks

Consider having three main components while building an off-meta decks:

As mentioned above, we have a few off-meta win conditions:

This list leaves you some very interesting choices! Beatdown and Siege archetype are well re-presented. You might also be able to build a Cycle deck with Prince and Dark Prince.

After selecting an off-meta win condition, ask yourself the following questions:

Why is this win condition weak in the current meta?

In general, they are inconsistent. They really shine in some situations but struggle in the others. For example, Sparky is very powerful in some matches If your opponent has bad starting hand or makes terrible mistakes, but she can easily be stopped in other situations.

You should identify the cause of this inconsistency first. For example, P.E.K.K.A is very weak to swarms. If she doesn’t run into any swarm, she could get a higher chance of getting value for the cost. For Mortar, you need to for your opponent to waste his counters or out-cycle him.

Generally, win conditions are off-meta because they are inconsistent. They shine in some situations but struggle in others. Look at Sparky, for example. Sparky can be very powerful in some matches if your opponent has a bad hand or makes mistakes, but she can easily be shut down in other situations. This inconsistency is found in most off-meta win conditions, so you have to be willing to experience it if you build an off-meta deck.

Once you have figured out what your win condition is weak to, patch the weakness by picking out win condition assistants. For P.E.K.K.A, Executioner would pair very well since he clears out swarms nicely. You could also give Furnace a try. Also, you might think about away to deal with Ice Wizard (Rocket, Lightning…) which could also destroy the distracting building, giving your P.E.K.K.A a clear path to the Tower.

What has great synergy with my off-meta cards?

You should also think about synergy while patching the weakness of your off-meta win condition.

Regardless of whether your cards are powerful or not, If your deck has a great synergy, It will be successful.

For example, the Executioner + Tornado combo gives you a lot of power not only on defense but also on offense when coupled with the P.E.K.K.A.

What is my win condition’s unique attributes?

In general, off-meta win conditions have unique mechanics (Sparky has massive shot, Battle Ram has charge etc). You should identify the unique attribute then select the right win condition assistants which amplify it.

Your deck is built to empower the win condition!

You should identify the current meta first when selecting the Meta Response cards.

This is where you can make your off-meta deck shine! If you pick uncommon cards, your opponent will not know what to expect! This is the beast reason to play with an off-meta deck!

Find out which off-meta cards would mess with your opponent and would complement your deck well.

Look at the core cards in your deck! What else do you need? More anti-air? More defense? More splash? You should pick cards which can support the rest of your deck, making it stronger on both offense and defense.

I have some great off-meta decks here for you. All of them were tested and submitted by a lot of players on Reddit.

This deck was shared by Handsome_Claptrap (personal best 4350).

This deck utilizes 3 off-meta cards and as well as an off-meta win condition. This deck is a classic example of a great beatdown deck. Tombstone, Fire Spirits and Ice Wizard are your strong defensive core, which can cycle quite fast, helping you get Elixir Collector ready for the P.E.K.K.A + 3 Musketeers ready at the late game. As people don’t use Three Musketeers a lot nowadays, you will definitely take your opponent by surprise. Fire Spirits, Ice Wizard and Dark Prince will help you clear out swarms quickly.

This is a very surprising deck because it has no Elixir Collector but 2 pretty heavy tanks. With the recent buff to the P.E.K.K.A, you can absolutely use her on defense. She can easily cut down tanks and then you can use her on a threatening counterpush. Royal Giant will help you do the double lane pressure effectively.

This deck works very well because of the low-cost cycle cards. Use Knight, Ice Spirit, Skeletons and The Log to protect your Mortar. Princess and Rocket allow you to chip damage their Towers.

Some other great off-meta decks for you:

And a lot of great off-meta decks shared by Clash Royale Arena members in the comment section below xD.