Hey Clashers! It’s Krux here and I’m back again with a gust of cold air and a new deck guide. Cycle decks are never out of fashion and I prefer them over heavy beatdown decks. Today, we are going to learn the Wall Breakers Prince deck. Check out the best counters to Prince if you are having trouble defending against it. Let’s go!

With 3.5 as the average elixir and shortest card cycle of 8, the Wall breakers Prince deck is a fast cycle deck. This has godly attack potential and godly defence. The free-to-play score is not so good as it has three legendary cards and two epics.

The Wall Breakers Prince deck comes with very good synergy and godly versatility. The cards go well with each other—we can pair any two cards and get damage. Opening: Our Wall Breakers Prince deck is a fast cycle deck and we don’t have to wait much if you get bored in the start of the match. Once the elixir bar gets full, we can start with our cycle. Either place the Prince at the back, or the Miner on the enemy’s tower and Wall breakers at the bridge. Don’t spam the Mega Knight at the bridge; it will be a blunder. My favorite is Miner + Wall breakers as the first move. It catches the opponent off guard and they end up wasting elixir if they don’t have proper defence in cycle. Our next reactions will depend on it. If they drop a heavy tank such as Pekka or Golem, then wait for it to reach the bridge. Our Prince and Mega Knight are ready to defend against anything. If they defend the wall breakers, just wait for their counter attack. Do not push again with the Prince or MK. 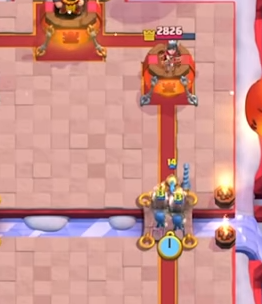 Mid-game: Our Wall breakers Prince deck gives us great versatility for most type of attacks. Defend the enemy’s counter attack using Prince and bats or Mega Knight and Bats. Zap if needed for swarms. After defending the push, we will let the elixir build. If our defence survives, we can use the Goblin gang as support. And just like this, we will send our Miner and Wall breakers again to the opponent’s tower. We will let the elixir bar fill after this stampede. Once it is full, we will start the cycle again. We now know the enemy’s deck. If it is a heavy deck, we will use our Prince and Mega knight in the same lane to force them to use elixir. The opponent will be busy defending the Prince and the Mega Knight and we will take advantage of this. Send the Wall breakers screaming in the arena. Zap should be on our fingertips to clear out the Skeleton army that the opponent places. Endgame: A fast cycle like Wall Breakers Prince deck should make the opponent annoyed with the Wall breakers. We can use our win condition whenever the opponent makes a overcommit. If the defence gets difficult, then we will use the Wall breakers and Miner in one lane and the Prince and the Mega knight in the other. This way, we can tackle any deck. Use Bats and zap wisely and there won’t be a problem.

Join our Discord is the place if you want to share your awesome moments or discuss new decks. Stay tuned with us for more deck guides, royale news, and other interesting articles. Clash On!