Hey Clashers! I’m Krux here to bring you the latest info about the game’s Season 13 update so that you aren’t left behind and can start gaming right away!

What’s the best place to chill at, during summer evenings? We are into July and we all are aiming to be positive in these times. We want the chill vibes of laying on a beach, sipping coconut in the sand and making sandcastles. Supercell knows it too and we are getting the next season update in Clash Royale on July 6. It is called Battle Beach! I tell you it is going to be very awesome. Let’s have a look at Season 13 updates and what it has to offer.

This season will bring a lot of interesting features to the game including a new Pass Royale, arena, emotes, modes, and balance changes. It is also based on a Beach theme, and that makes it look cool. 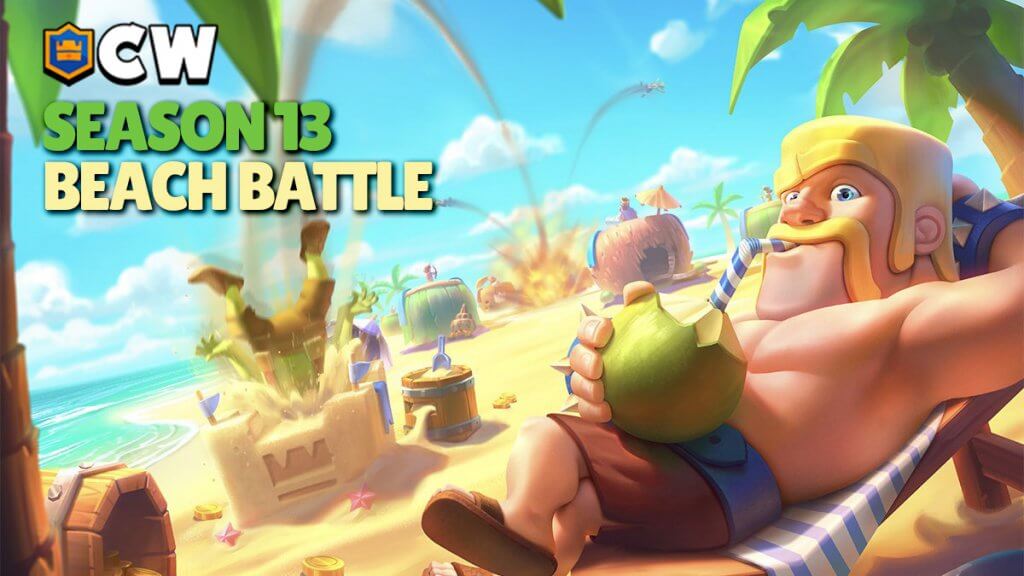 The brand new Pass royale for this season will include some cool new emotes and a super cool tower skin.

Tower Skin: Tropical Turret
The new tower skin that comes with the pass royale in Battle Beach (Season 13) is called Tropical Turret. It is just as the name suggests. The towers will have colourful brown and green skin. The Princess towers will have green leaves around it, which looks quite bright and pretty. The King tower is sitting in a coconut shell. There are also some watermelons lying around the towers if you feel like hydrating.

Exclusive Emote: Summer P.E.K.K.A. sipping on a coconut.
I bet you haven’t seen a P.E.K.K.A in a Hawaiian floral t-shirt before. On top of this, the P.E.K.K.A is sipping some coconut water and winks at you pulling the sunglasses up in the end. The level of swag he got is quite high.

Skeleton Snorkel: This emote can be obtained by completing a challenge in the season.

Boombox P.E.K.K.A: This emote will be there in the shop to buy. If you have a taste for PEKKA grooving with music, go for it.

New Arena: Beach Battle
The towers look cool. Even if you don’t have the skin, you will get the vibes with the new arena. The Battle Beach arena has a sandy finish on the ground with some seaweeds here and there. Royal recruit is chilling on the left side and a dart goblin is sitting with his feet dangling on the right, without its mask. There are barrels floating in the sea which surrounds the arena. The canal has a bank studded with boulders and shingles. There are also shells and starfish lying around. Overall, it gives out summer feels.

Every season, with it, brings some balance changes which changes the card attacks and damages or speeds a bit to make the game more playable and fair.

Like every season has a card which is boosted to your king tower level for the season, this too has one. The Ice Wizard will be boosted in Clash Royale Season 13.
We are excited about the new season. We will be adding the new season meta decks, tricks, and wonderful tips to top the game. Be sure to check Clash World out regularly. Good Luck!