Hello Clashers! This is KairosTime with a complete guide on how to play Rocket Siege from beginning to end! I’ve been playing around with Rocket decks for awhile now, and have had loads of success both in Challenges and in the ladder with this play style (I’m currently above 4000 trophies). This in-depth guide will help you have the success that I have had.

In order to understand how to build a Rocket Siege deck, it is important to realize that this type of playstyle focuses on Defense first, and Offense second. This means that the majority of your cards should be focused on creating an unstoppable defense so that you can save up your elixir for guaranteed damage using your Rocket.

After adding the Rocket in your deck, you need to decide between what your deck’s playstyle will be:

The next step is to select at least 2 defensive buildings that counter the current meta. Usually you will want a cheaper building (Tombstone, Cannon, or Tesla) and a tanky building to dish out the damage (Bomb Tower or Inferno Tower). That being said, these aren’t the only buildings that can be used. Here is a complete list:

After you have your defensive buildings, you want to ask yourself what weaknesses your deck already has. Is it going to be weaker to swarms or heavy troops? Once you know, you want to fill your deck with the most defensive troops that balance your deck by selecting some single targeting troops and some splash troops. Usually, the best defensive troops are cheaper cards that move slowly so they stay on your side of the field for the longest amount of time. Here are some of my favorite defensive cards to use in Rocket Siege decks:

You can definitely have other cards in your Rocket Siege deck, but these are the cards that I have found to work the best. Anything more expensive, or that moves too fast, is usually not the best, but could work if you play your cards right.

If you still need to another card in your deck to balance it out, it’s never a bad idea to have another spell. Having another spell isn’t always very necessary because your other very defensive troops and buildings should do a fine job at defending, but having a spell in every deck is usually a good idea. I recommend either Zap, The Log, or Arrows.

Here are some Rocket Siege decks that I’ve played with and have made successful if you want some examples: 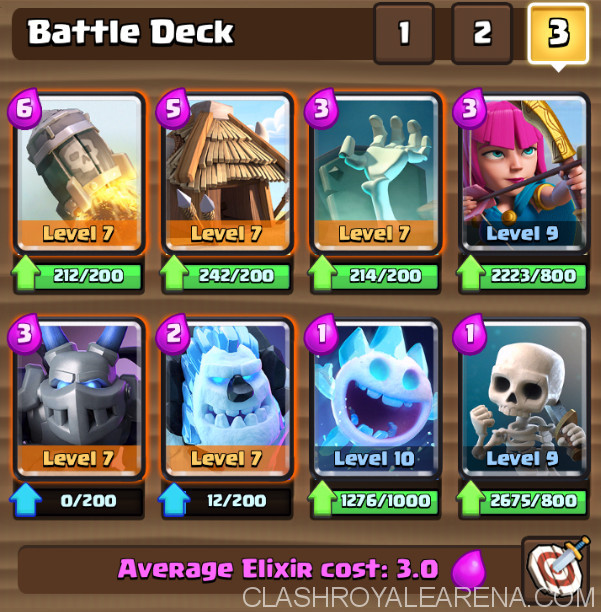 The first step in playing a Rocket Siege deck is knowing when to Rocket your opponent’s tower, and when not to. You definitely don’t want to just throw down the Rocket as soon as it’s in your hand, unless your opponent’s tower is nearly gone. Instead, you want to wait until you can clear enemy supporting troops when they’re within Rocket Range of the tower. The more expensive your opponent’s troop, the better it is to rocket it. Obviously, Elixir Pumps and Sparky are the best troop to Rocket when next to a tower, but I’ve even Rocketed 3 cost cards when I had the elixir advantage.

Because the best way to rocket a tower is when it has a support unit next to it, you need to make sure your opponent is committed to a lane before simply throwing down the Rocket. You can make sure your opponent is committed by letting them take some health off of your tower. Obviously you don’t want to just give it to them! Let them work for it, but make sure that when you do, you’re spending less elixir than they are. Once they are committed to a lane, you can start putting up your unstoppable defenses. Having 2 or even 3 defensive buildings up at a time is a great way to let your opponent struggle to get to your tower while you build up enough elixir to Rocket a nice chunk out of their tower.

Once your opponent is close to 1000 hp on their tower is when things get tricky. When they know that they are close to losing their tower, they will do anything to stop you from getting enough elixir to both defend, and throw down the rocket. At this point, I’ve even had people switch lanes when both my tower and their tower are below 1000 hp. It is important that you keep your cool and try to defend while spending as little elixir as possible. This is when your cheap defensive cards will really come in handy. If you play your cards right, you should be able to throw your rocket down and sit back and watch as the rocket slowly makes its wait to the enemy tower.

Thanks so much for reading this! If you have any questions, feel free to ask them in the comment section of any of my videos and I’ll them as soon as I can!