The Cannon Cart challenge is up guys! Do you want to win the Cannon Cart as well as possibly get it out of chests earlier than everyone else?

In order to help you guys succeed, I will be sharing some tips that might help you potentially get 12 wins in this Challenge!

In 2v2 matches, some win-conditions are not good as they are in normal matches.

For example, Graveyard is not really that great in 2v2 battles. This is because of the slow Elixir flow that might end up you taking too long to deploy a Poison or Arrows while Giant, Golem etc are reasonably good win conditions. Also, with 2 hands and 20 cards, your opponents will find it easier to deal with Graveyard in 2v2 matches.

Similarly, Goblin Barrel and 3 Musketeers are not really great in 2v2 matches due to the number of spells might be chosen here.

Not so good win-conditions for 2v2

Note that when picking a win condition, be aware of what your partner has chosen. For an example if your opponent picks Graveyard, rather than choosing something like Hog, it’s better to pick a Giant, or a Golem as these two would synergize well with each other. There are times when you will have to pick one win condition even if it’s not the best win condition but it’s better than nothing.

Build deck around your win condition!

For example, If you pick Graveyard as your win condition, make sure you have a spell to clear counters (Fireball, Arrows, Zap, Poison), a tank for the Graveyard and some good defensive cards along with some cheap cycle cards. You don’t want to have a 4+ average cost Graveyard deck.

Another example is that you ended up with a Giant deck, you want a way to counter Executioner Tornado, pick a high damage spell like the Rocket, Lightning etc as well as swarm clearing spell  like Log, Zap and/or troops like Executioner, Wizard etc.

Also if you are not too comfortable with how the Cannon Cart works or If you are not really able to make sense of how to use it, I do advice not picking it! Watch OJ’s video first to take a look at how it works.

If you had to choose between a Wizard and Minion Horde, pick the Wizard.

Valkyrie or Graveyard? Although Graveyard is a win condition, you should avoid the possibility of getting hard countered by your opponent because of a bad pick.

Now, one thing I have learned from playing 2v2 is how spammy this game mode can be.

It is very important to be able to handle the onslaught coming at you if you and your teammate end up on defending.

In order to succeed, you will need cards that provide great crowd control. This means, prioritize picking cards like:

If you pick a card like Wizard and get to choose between Tornado and something else, the safest bet is getting Tornado because that will make defending so much easier.

Now you ideally need 1 swarm clearing spell and a high damage spell that can finish off the game. There are also some spells you should avoid entirely in 2v2.

When choosing spells I always go for counter spells to something my opponent picked.

Between two spells assuming only real difference is damage (Fireball and Rocket), I would pick a Rocket. Simply because of higher damage and potential of getting value when Rocketing on defense. (Hog+ Barbarians push for an example)

Keep your deck cheap but not too cheap otherwise you will need to play with 10 fingers.

In draft challenge, normally the choices will be pretty similar (for example Minions vs Minion Horde). Choose the cheaper cards! It’s best to keep your deck cheaper. We never know what the opponents give us.

If you pick too many expensive cards, you will give the opponents good opportunities to get positive Elixir trades with heavy spells (above).

Always hover your cards for a few seconds!

This is a super-important tip. Players waste tons of Elixir every day because of not doing this.

Hover your cards so your teammate will have a decent amount of time to do the right things.

You guys are a team!

Sometimes, when I place my Golem down, my teammate decides to play his Giant Graveyard push on the opposite lane (wute?).

If you get a bad teammate, try the best!

There is nothing we can do her.

Don’t leave the game If your teammate Logs Minions or Fireballs Golem. Try your best to help him/her out.

I got coupled with a bad teammate once. I did the best to cover him on defense and all he could do was to place his Graveyard when I play my Golem. We won that one.

Tips for the Cannon Cart

Cannon Card is basically a moving Cannon with a shield. While the shield is up, Cannon can move. Once the shield comes off it’s a regular Cannon.

It is a 5 Elixir card so I do not recommend you cycle the Cannon Cart, instead use it in response to a certain card.

Do not use it as a win condition!

The Cannon Cart is obviously a glass cannon but with a decent amount of HP. This means sometimes it can act as a mini tank or a glass cannon at the same time.

However, it’s better to treat it as a glass cannon in all cases.

Here are some cards that can potentially complement defensively and offensively when used with it:

This section was shared by Jerrymouseisme 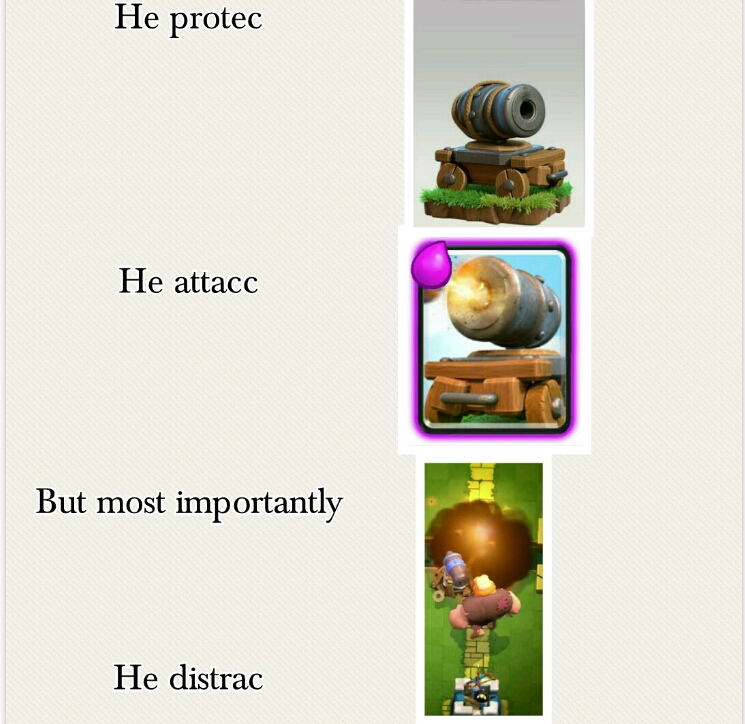 Hello guys, As always, Supercell is releasing the new Balance Change update on April 24th in order to make the game fine tuned and to...
Read more